Joseph and Sheila Murumbi at Muthaiga house with statue by Francis Nnaggenda.

JOSEPH ZUZARTE MURUMBI was born in Kenya in 1911, from a Goan father and Maasai mother, the daughter of Murumbi, the Maasai Laibon (political leader) for the Uasin Gishu Maasai.  His father had arrived in Kenya in 1897 at the time the first railway was just entering the area where Murumbi was later born.

Joseph and Sheila Murumbi were among Africa’s most famous private collectors.  Their unique collections of art, artifacts, books, documents and postage stamps span the African continent.  Joseph Murumbi was the first Foreign Minister of Kenya and the nation’s second Vice President.  He was instrumental in forming the country’s new constitution and was largely responsible for setting up the country’s embassies, high commissions and consulates at the time of independence.

How Murumbi’s heritage was stolen.

Joseph Murumbi was an ardent supporter of the pioneer artists of East Africa, those artists who started their careers, against all odds, shortly after independence. In fact, when he joined with Alan Donovan to open Africa’s first Pan African Gallery, African Heritage, he made his entire opening speech to be an appeal to Margaret Kenyatta, the then mayor of Nairobi, to support these artists, especially Francis Nnaggenda, who was teaching at the University of Nairobi at that time. He said he had bought five of the monumental works by this artist although no other African had ever bought one. He asked the mayor to buy Nnaggenda’s huge works to display in public places in Nairobi. This fell on deaf ears and Francis migrated to the USA where he stayed for 25 years before returning to become Chairman of Fine Arts at Makerere University in Kampala. One of his colossal works, the “Mother and Child” which stands in front of the National Museums of Kenya was commissioned by Joseph Murumbi.

‘A Path Not Taken’ – The Story of Joseph Murumbi

Compiled from transcripts left behind by the late Joseph Murumbi

On 31st December 1966, the Kenyan Vice President, Joseph Murumbi, walked into President Kenyatta’s office at his vacation home in Mombasa where he usually spent the Christmas holidays and announced: “Mzee (a term of respect for an elder) I wanted to hear from you whether it is ok for me to leave. Today is my last day. Mzee just turned his back on me and walked away. He didn’t answer my question. I think he didn’t want me to leave. I think he was hurt”. Having served President Kenyatta as his right hand man, first as personal secretary, then as Minister of State, Foreign Minister and finally the coveted position of Vice President, why did Murumbi decide to walk away from the pinnacle of power? This has been a subject of intrigue in Kenyan politics for decades. But the assassination of his friend and mentor, Pia Gama Pinto, had shaken him to the core, and he was very unhappy with the way things were going which he thought were not in the interest of the common person he came to represent. Instead, Murumbi chose to serve his country, his continent and the world in another role, as preserver and protector of the African heritage.

He was probably the continent’s greatest private collector of art, books, postage stamps, artifacts, textiles, jewellery and everything African, including 50,000 documents on Africa, many of which he acquired during the decade that he was in exile in England before Kenyan Independence, a time when friendly British MPs (Members of Parliament) would save
documents and information on Africa for him to collect and take away, which he gladly did.

In 1972, he opened the continent’s first Pan African Gallery, with his wife Sheila and Alan Donovan, an American designer. The gallery became a show window of African culture and the largest, most organized supplier of arts and crafts from Africa to the rest of the world for over three decades.

Photos from the book 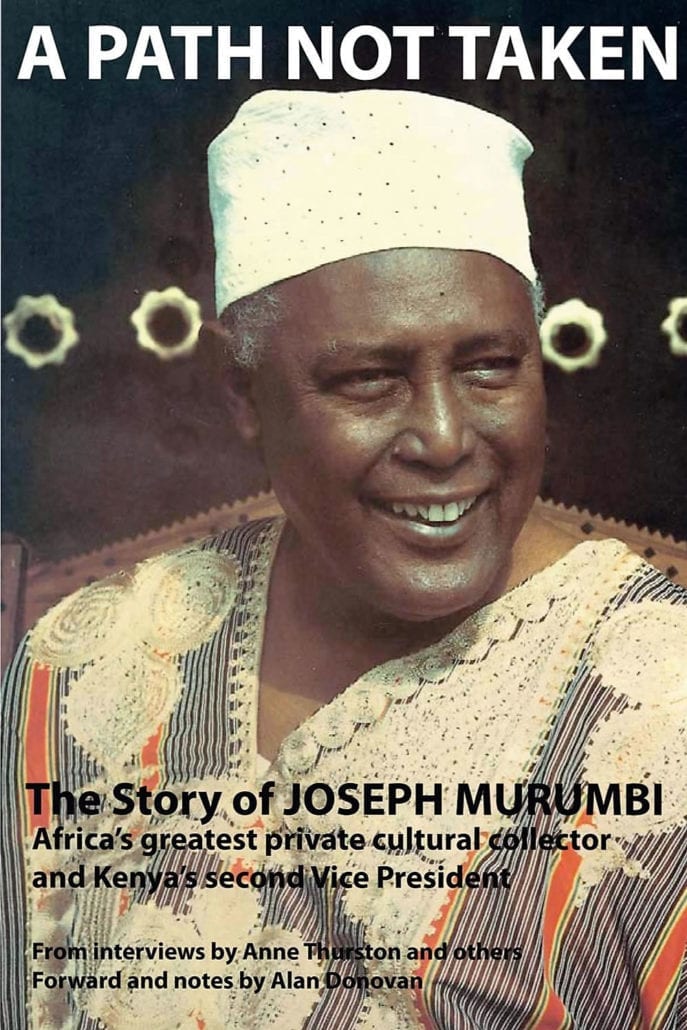 A Path Not Taken is available in soft-cover
at KES 1500 from:

The Murumbi Gallery was officially opened on December 6, 2006 on the ground floor of the Kenya National Archives, a grand old building with magnificent Greco-Roman columns that once housed the Bank of India from the early part of the last century.  It was later renovated and for a while was the Standard Bank.

The Murumbi Gallery showcases the collection of art and artifacts that Murumbi sold to the Kenya National Archives in l976.  It was stored for several years at his house in Muthaiga, which he  also sold to the Kenyan  government on condition that it be made into the Murumbi African Studies Centre.  UNESCO agreed to fund a hostel, library and kitchen at the facility.  However, the house was allowed to deteriorate and was  eventually torn down,  the land given away.  All the contents  were then moved to the basement of the present Kenya National Archives, which Murumbi had set up during his time as Foreign Minister and Vice President of Kenya,  where  once served as  Chairman.  The present Murumbi Gallery  was renovated and all the collections rehabilitated under the direction of Alan Donovan, Chairman of the Murumbi Trust, which was established in 2003  with a grant from the Ford Foundation.

Maps were disabled by the visitor on this site. Click to open the map in a new window.

The Murumbi Gallery is located on the ground floor of the Kenya National Archives in Central Nairobi.

Joseph and Sheila Murumbi were Africa’s most famous private collectors and copies of  their collection of Pan African postage stamps are on display on the mezzanine floor of the Kenyan National Archives.

It was Sheila Murumbi (then Sheila Anne Kaine) who first started collecting stamps as a young librarian living in the UK.  She was introduced to collecting stamps by her first cousin, David Shenker, OBE (who passed away in Australia in 2008.  It was she who interested her future husband, Joseph Murumbi, to stamp collecting and the couple continued collecting stamps for nearly half a century.

The collections include very early stamps used in Africa dating back to the mid 1800’s, as well as more modern stamps from the post independence period of Africa.  There is a very unusual and rare collection known as “The History and Development of East African Airmails” which traces the history of East African airmail from the very first airmail letter to arrive in East Africa (via Cairo and Khartoum) in 1927.  The collection has original airmail covers from the first flight to all destinations to and from East Africa. The Murumbi Pan African Postage Stamp Collections at the Kenya National Archives were organized and arranged by the Murumbi Trust with the direction and assistance of Ms. Pamela Howard-Reguindin, Director of the Library of Congress, US Embassy in Nairobi.  Funding was provided by the International Institute of Education through the Ford Foundation.

at the Old Provincial Commissioner’s Office, National Museums of Kenya.

Sheila Murumbi died in November 2000 at the Murumbi house off Ngong Road in Nairobi.  After her death,  much  of the contents of this house were taken away by her heirs in the UK.  The Kenya government then took action to prohibit any exports of items determined to be of national importance.  These items  remained in storage for over a decade.  Finally they were turned over to the Kenya National Archives (books and stamps) and the National Museums of Kenya (cultural items and postage stamps).

Under the direction of Alan Donovan, Chairman of the Murumbi Trust, many of the items were at last reunited and are now on display at the oldest building of Nairobi situated  on the city’s central roundabout  at the junction of Uhuru Highway and Kenyatta Avenue. Built in l913, it served  to house the Native Ministry and the  original Provincial Commissioner’s Office.

The building is the  “Point Zero” of Nairobi from whence all measurements to other destinations in the  world are taken.  Consequently, the stylish coffee shop on the grounds operated by two young Kenyan lady entrepreneurs  is also called “Point Zero”.  Point Zerio offers excellent Kenyan coffees and teas plus drinks and snacks.

The collections inside the building  include the Murumbi Home (personal items from the original Murumbi house in Muthaiga); artworks (sculpture and paintings); jewellery and adornment; textiles and costumes; books and documents; a small collection regarding the Pan African postage stamp collection  (all housed on the mezzanine floor of the Kenya National Archives)  and  the “Pioneer Gallery” where the artists from the time of Kenyan independence who were nurtured by African Heritage during their early careers, show their works.  This building has been the home of the Murumbi  African Heritage Collections since June 2013.  Through the efforts of the Murumbi Trust, the building is no longer isolated within the Nyayo House (new PC’s office) premises. Funding from the CFC Stanbic Bank has provided a separate entry gate, fence, driveway and parking lot. The Ford Foundation also assisted in the costs of the opening ceremony for the facility which was rehabilitated and the collections displayed by the Murumbi Trust.

Maps were disabled by the visitor on this site. Click to open the map in a new window.

The Murumbi African Heritage Collections are located in the Old Provincial Commissioner’s Office next to Nyayo House, Nairobi

It was Murumbi’s express wish that he be buried as close as possible to his good friend and political mentor, Pio Gama Pinto, who was assassinated in front of his house in 1965. Pinto was laid to rest in the old cemetery at the Nairobi National Park. As there was no room in the cemetery for Murumbi, the Kenya government allowed him  to be buried, on his own, outside the cemetery, in the Nairobi City Park.  When  Sheila died in 2000, she was buried next to her husband.

The Murumbi Trust then got permission to make the their plot  into a memorial, with fencing, landscaping, benches and tables as well as to display  information about the Murumbi legacy. A sculpture garden with sculptures by leading  East African sculptors is also on permanent display near the graves, including works by Elkana Ongesa, Francis Nnaggenda, John Odochameny and the late Expedito Mwebe.

The memorial is open to the public at all times.